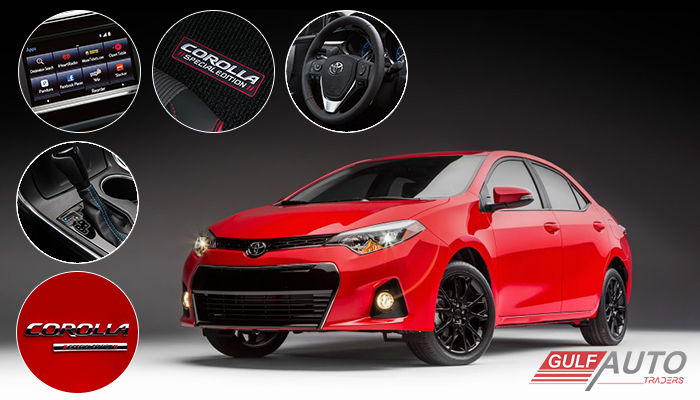 but also is the bestselling automotive in the history even when it comes to used cars for sale in Dubai. Back in 2013, it successfully stole the title from the Volkswagen Beetle with 40 million Corollas manufactured then and more so since.

On that note, the Toyota Corolla is now on its eleventh generation and with the 2015 Chicago Auto show nearing, Toyota itself decided to bring in some new limited-edition Corolla models accompanied with the refreshed Avalon. Following that, one of the new limited-edition models include the Corolla Special Edition.

The Corolla special edition is Toyota’s newest model aimed to car buyers who are looking for cars with classy and also up-to-date high technology at only just a bit lower car price, that when compared to other luxury cars emphasizing the same qualities. The 201 Corolla Special Edition is known to share Corolla S Plus’ 1.8-liter four-engine and the CVT powertrain.

On the other hand, another feature of the super-special car includes having three excusive interior paints. With these paints, the car gives the buyer with the option of choosing exactly the color which suits their preferences.

They can choose from Absolutely Red, Super White or Black Sand Pearl, although the Super White variation is not exactly super white, not to mention that the color is regular on Corolla S Plus cars. In reality, every part of the Special Edition’s interior is identical to Corolla S Plus, plus all the niceties.

At all four corners of Corolla Special Edition are the gloss-black 17-inch aluminum wheels exclusive to the mode. That aside, you will see the Special Edition badge of this new-limited model placed down the Corolla word mark on the trunk of the car.

Corolla Special Edition is said to have not such unique design with the very basic black interior, red stitching on its seats, steering wheel, shifter and armrest. You can also find some red accents that adorn the door rim and the dashboard. Although it is basic, with the car having brilliant application it makes it real distinctive among others.

Moreover, being the newest edition by Toyota, the Corolla Special Edition is donned with advanced technology audio system, navigation, application functionality, plus it is sun roof. With all these special features by Corolla Special Edition, it really does sound one of a kind. There is not performance-adding feature that has been added to the special edition.

Now, Toyota has not said anything yet, but the Corolla’s nameplate seems to relate to its upcoming 50th anniversary. This new Corolla edition is priced $20,635 which was produced August 2015 up to January 2106.

Being limited edition and when it comes to cars for sale in Dubai, the number of cars available is limited only to about 8,000 units. Its major competition includes the Ford Focus Sedan and Chevrolet Cruse which both has something to offer.
Tweet