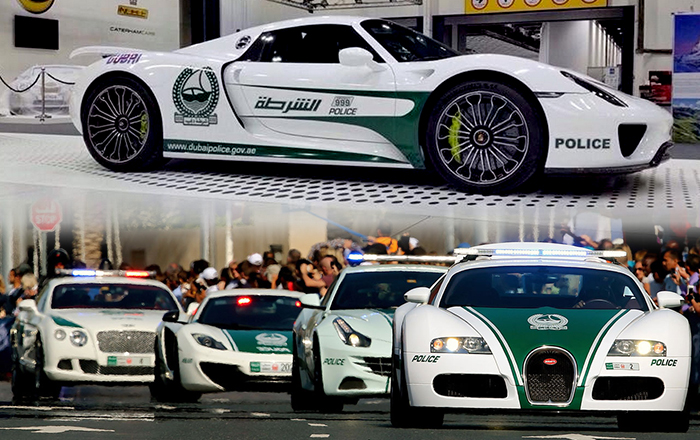 Expensive and branded cars and vehicles are usually use for luxury for most rich people. Celebrities, presidents and other famous personalities in the society usually use such vehicles.

However, nowadays, police officers are now using luxury cars in order to execute their missions and patrol in their respective areas. The Dubai Police became the living proof for this.

The Dubai Police has made great decision as they add the Porsche 918 Spyder unto their growing luxury patrol fleet. The said vehicle was considered an environmentally friendly that was unveiled at the recent Dubai International Motor Show, which had attracted plenty of interests from tourists and visitors.

Who would have not be amazed and wow with this super car that is worth $840,000? It was considered the most expensive Porsche available having just 918 of the hybrid vehicles that were ever made.

According to the Major General Khamis Mattar, a Dubai Police chief, the vehicle is made and is equipped with three engines including two electric motors that deliver additional 279 horsepower for the combined output of the 887 horsepower and the other engine is a 4.6-litre V-8 engine, which generates a power for up to 608 horsepower. The car Porsche 918 Spyder has stop speed of approximately 340 km/h or 210 mph.

Just as the other cars used in the Dubai Police’s luxury fleet, the supercar will also be used to patrol on the tourist areas along with the latest technology that was installed unto it. As for the current luxury fleet, used by the Dubai police includes Chevrolet Camaro SS, Ferrari FF, Bugatti Veyron, Aston Martin One-7Mercedes-Benz SLS AMG and Lamborghini Aventador.

Because of the great features that the luxury car, Porsche 918 Spyder offers, the Dubai Police became the envy of the world. Adding the vehicle to its stable of the elite crime-fighting supercars creates a loud noise around the globe.

The amazing luxury cars are part of the government-outlined police specification that was released earlier this year. This “top-of-the-range” car became a necessity in order to fight the crime in the city having so many highways. In order for a police officer to use luxury cars for fleet, a compulsory driving course is needed.

Some speeding drivers have become known to plead police officers from detaining them and escorting them to the station in their “cutting-edge vehicle”. Due to the increasing number of accidents concerning motor, cars and other vehicles, Dubai Police would want to increase patrol all-round the city through the luxury cars.

To maintain proper order and peace are what the police officers aim. They are willing to give half of their life just to ensure the safety and protection of the people from danger. This is what Dubai police also aim why they are keeps on implementing and improving when it comes to their facilities and equipment. Having their luxury car collections are not just for display and for luxury but for a purpose.
Tweet